I spent the day riding and seeking that one place or thing that would speak to me and say, “here i am!” You know that place, that thing, that experience. The one you go home and can’t stop talking about. Zooming by and flooded with beautiful country and life around. By the evening there were many places and things I’d seen to get lost in. Scrolling through my phone looking at things I’d stopped and taken time to capture in photo. They were all good, all unique in their own ways, all which had some good stuff that had already tucked themselves tightly into my mind, but, just, I don’t know, I still hadn’t felt “it.” The next day we ride off once again, and still, I’m out in search of that one place that would blow me away and I knew it was out there, it always is. However, thick clouds and light showers would turn this search around some. A change of route. Maybe not the roads we had intended, but they were roads and they would lead us home.

Running from the rain isn’t the best, but the clouds provided some shade here and there from a scorching sun and the buildup behind us, I must admit, was a bit exciting. We’re headed home and blasting through the curves and straight aways. It was suggested we re route through a small town by the name of London. Apparently there was an old dance hall there that was a must see. We rode into town, empty streets, few houses scattered here and there to welcome us. It was different. I hadn’t spotted anyone out, no stray dog crossing the street…no tumbleweeds. Just an empty road, some empty buildings and yes, the London Dance Hall. We pulled our bikes and parked, took our phones out and standard pictures. It was kinda cool, it had the rustic look, ghost town appeal and I could see some history walking around my over active mind. Maybe, just maybe. We read the signs, stand in the middle of the road and laugh a little recalling small things from the road. Across the street aways, I spot a man walking down, carrying a small box. He gets closer and makes his way across the street towards us. We do the standard salutations, ask about the hall and if it’s still up and running. The owner has it scheduled for late summer, August, but it’s still open. Getting ready to hop back on, we decide to ask if there’s a place to get a cold drink in town. The man replies that the dance hall has a bar. We asked him when it opens. Walking away from us towards the building he tells us, “as soon as I unlock the doors.” (can you feel it? are you seeing what’s happening here?) I walk towards the door and let him turn the lights on at the bar, I walk in and let my eyes adjust some, I focus…here it was, my “somewhere.” Enter stage left. I could not have written the scene any better. Straight out of the imagination of my mind it all came into color. It was dark with the brightest colors dancing in the room, you could feel it, smell it…live it. It wasn’t anything that you could say was like stepping back in time, this was the time. The here and the now, this was London, Texas 2016. Before I could wipe the silly grin off my face I turned around and looked at my friends and I think they saw it in my eyes, we were going to be here for a while. In fact, I don’t think we ever left.

You walk in and then led to the bar with a perfectly set pool table guiding you there. A welcoming bar, stools and bartender. In some way I felt like I’d known him for years, I felt welcomed, I felt like I belonged somehow. As he gave us some information on the Dance Hall I asked him if it were possible to see it. Without hesitation, he swung out from behind the bar and opened yet another door. Enter stage right. Through the darkness the dance hall jumped out and grabbed me, pulling me into it, mysterious and yet familiar. The scent of the room was excitement. I could almost see the place filled with people shuffling across the dance floor as a band played their favorite tunes. I could hear the laughter, boots on the floor and the sharpness of an old steel guitar. Were there voice, I don’t know, I only heard the song. I was somewhere, not just anywhere. 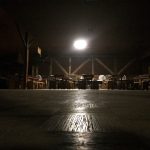 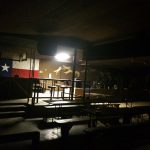 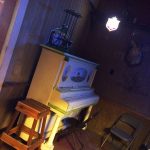 Walking back into the bar, we gathered across the bar, the end of the bar, behind the bar. One more Dos Equis? Sure. In walks an older gentleman. He said he was looking for the keys to the bikes outside to take for a ride and they weren’t there. I look up at him and pull out my keys, I said “taker her for ride.” He laughs replies “maybe not today” and sits down on the stool next to mine. There was some connection or unspoken familiarity as the bartender places a beer in front of him and turns to write down what I perceived was the opening of the nights tab for this gentlemen. The man takes a sip of his beer, looks up and reaches out to shake my hand as he introduces himself. He does this to all three of us. It was nice. Before you know it, we’re all laughing, hearing jokes and sharing stories of bar-b-que. I always have to slip in some good bar-b-que war stories you know. This is Texas after all. As time went on, more people started pouring into the place. I looked at Jim, the bartender, yeah, by now we were on first name bases, and asked him, “you didn’t tell us this was a happening place!?” He replied, “I didn’t know.” One by one, each person that came in would be welcomed with their beverage of choice, all without asking, and all reaching out and shaking our hands as they introduced themselves. More jokes, more stories…old friends. You can’t make this stuff up. Locals, people from surrounding towns, people who were invited by friends. You know you’re “somewhere” when a stranger walks up to you, introduces themselves shaking your hand and precedes with “You’re not (insert choice of religion here) are you?” and then tells you a joke. It was new, yet familiar. I’d been here before yet I’d never met any of these people, stood at this bar…danced in the hall. 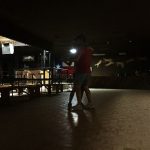 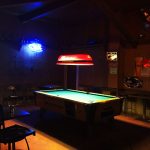 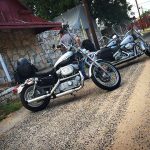 A sign on the outside of the hall reads “SUNDAY JAM SESSION”. I asked Jim and he stated they just started getting together and playing music. Then people started bringing covered dishes. I’m not sure how many people gather on Sundays, how  much food or how long they play and who plays, but I can hear the music. We say our good byes, shake more hands as we walk out. Laugh and mount the bikes. The first gentleman followed us out and sees me on mine. He tells me, “That’s your bike? Good thing I didn’t take your keys, I woulda hopped on the wrong one.” He smiles. Santa Anna, Texas, Population 1081. To get where you’re going, chances are, you’ll need to pass through there, but be careful not to blink you might run one of the two signal lights in town. If you need to gas up, there’s one convenience store. Falling asleep? Need for a frozen treat. shake or meal to go, don’t worry, you know every small town in Texas has a DQ (that’s Dairy Queen you non-Texans). Within the city limits the hear pulsing heart of the town is its people,  keeping it alive with shops, restaurants, a local grocery store, churches and a school (1A, six man school).

If you're looking for that diner that you often see in the movies, you know which one I'm talking about, where you step back in time and feel you're in one of the last diners in the world where you simply soak in the character as you walk in the door. Yeah, that one!Well, The Double H is it. Don't be scared that the small sized dining room is full to capacity as you pull into the bumpy caliche parking lot full of pickup trucks and cars, an occasional tractor or semi along the road, chances are there's a table open. This is the diner from the movies. Each chair indicates one of those vehicles in the parking lot. Father, son, grandfather, uncle, mother, aunt, sister, cousin, relative…neighbor. They're here just like they have been coming for years. Watch a table being seated by the waitress. She repeats their order before they even see the menu. Great food made from scratch the way it's supposed to be made, hot, fresh and delicious. I will recommend the chicken fried steak or chicken fingers. One bite and you'll slap your momma! Don't laugh, I'm being serious. It's a must for you chicken fried steak enthusiasts. Not in the mood for the classic diner, well jump yourself into some great barbecue sauce that often comes accompanied by some good, well, barbecue. There's a local food trailer, Young Guns BBQ Grill off the side of the road at one of the major intersections, remember, there are only two. I'm not sure which one has more weight on character, Tim (the pit master) or his food, you'll remember both long after you pass through. Slow cooked pulled pork and the brisket are highly recommended. It's small, it's quaint, I like it. Two signal lights where you can stop and look around you and soak in a welcome feeling. Train tracks a block south of the highway whistling it's way as it's done for years. The same train that will rumble it's way through many other places we pass through. Step into any of the small shops and you'll be welcomed with a smile, walk into any of the three restaurants (yes, I'm including Dairy Queen) and you're greeted by both a waitress and the patrons. Going down the road, prepare your hand, as people wave at you…it's Texas after all. If you're driving through and have some time, I urge you to stop and take a stroll, if not for some cool shops, do it for the people and the stories.