We Were Giants – Sprinklers 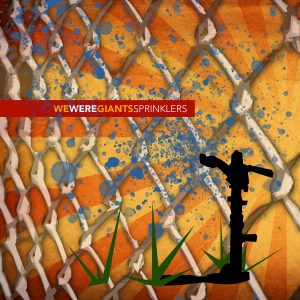 ONCE, WE WERE GIANTS (the sprinklers)

Ingenuity. I’m pretty sure it was frowned upon, but damn if it wasn’t cool. Yes, pun intended here. Summers were hot, dry and windy. The center of the barrio here was Alamo Park, or later I am to be corrected “el” Alamo Park. We roamed from house to house around the park, family and friends as there were no strangers. Maybe some that were strange, but never a stranger. This was the epicenter of all activity and celebration during those years. Birthday parties, fiestas, horseshoes, softball, the “cacita” (I’ll get into that another time). Parades around the park for Cinco de Mayo, Dieciséis de Septiembre, weddings, or just cruising. Green and covered with trees and grass. And here come the sprinklers. I’d watch the older kids find a good stick and jam it into the sprinkler base and the water would gush out into a large fountain for all to cool off in. We’d laugh and wait our turn to jump across the shooting water, pushing and shoving, sliding in the grass, in the mud, in our clothes and shoes, soaked. We played for what seemed to be an eternity until someone from the city would come and turn it off. I tried to do it myself, maybe once I got it to work, but no one around to share in my short victory before the stick popped out. In the winter during a good freeze, we would wake up sometimes and look across the park, there would be an enormous ice sculpture fountain. It was amazing and crazy. I could never figure out how it would freeze and look just like it was carved out of ice to look like it was shooting up in the summer. It stood tall and shimmering in the light with promise of another summer when we would be giants, one more time.