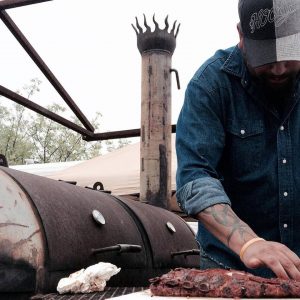 BBQ Cook Off, Santa Anna, Tx. World Bison Cook Off. After a long night and early morning the pit master now running off adrenaline alone prepares the the meat for submission. In this shot, Pork ribs. The world seeming distant as time closes in on hard work, sweat and smoke. The moment of truth in the hands of a chosen few BBQ aficionados. I can only imagine, as I’ve been there before, the thoughts going through his head as he slices through the tender meat. “Did I take them off too early. The taste is there but something is missing. Damn these are good, best ones yet! Jeez I’m tired. I just might have the winner. The bison, man that was tough one, but I think I got it. Gonna get (insert a buddy name here) to walk these over and get me a cold beer before I look at the brisket…” and so on. In Texas, we take out BBQ serious. It shows. I remember being in Vegas one year and asking a local if he could direct us a good local restaurant. He immediately tells us that there’s a good place to get some good barbecue. I look to him and remind him that were from Texas, we don’t play around with barbecue. He assures us that it’s pretty good and he didn’t think Texas had the corner on barbecue. I reminded him that cows from all states make pilgrimages to Texas just to die before our smoke pits to become Texas barbecue. To the blood, sweat and tears, a good, trusty pit and the trees from which the wood came..:thank you. #somewheretexas #bbq #ribs #barbecue #life#cookoff #funtierdays #life #texasroads